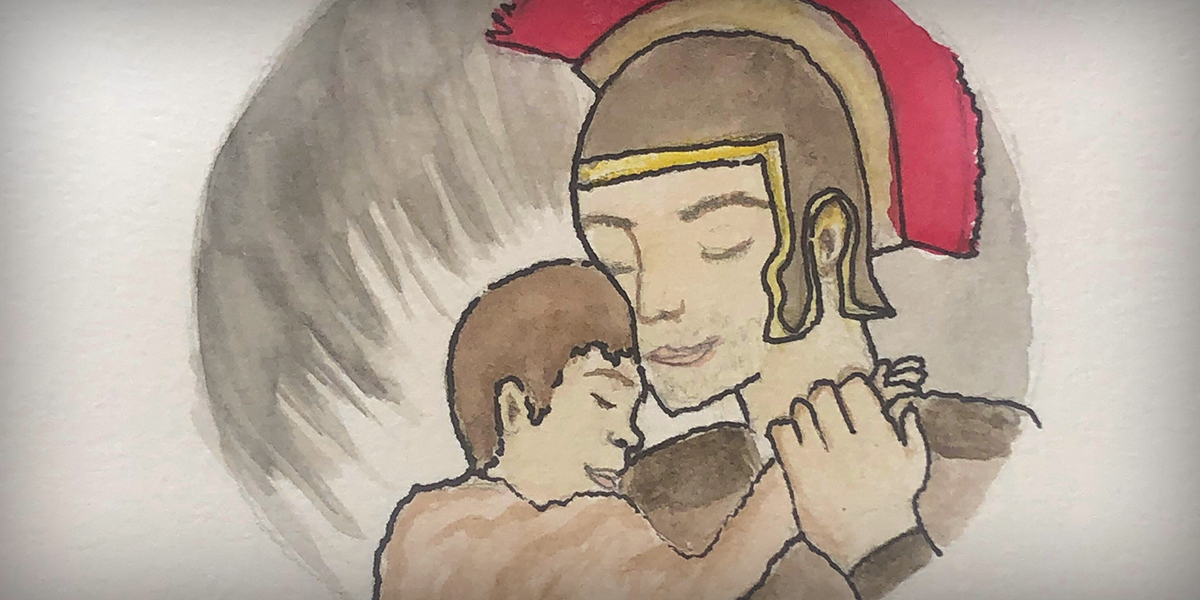 The Jesse Tree blazed a trail for us from creation to cradle, all the while tenderly tiptoeing towards the cross. While many would begin trimming tinsel from tree in the escaping days of December, I would beg us wait. For there are days between cradle and cross and they hold sacred scenes and holy hearts. If we can but wait with Him a few more days we will find ourselves entered into epiphany. A place for a deeper look and a wider view into an appearance like none other.

Jesus approached again and again and unhurried hearts beheld Him. A sudden and striking recognition and realization came of who Christ was and where He dwelt.

These moments still come into our minutes and ask us to allow the story to continue to become, evolve and ascend. To take us to places where Heaven meets earth in the manifest majesty of Jesus.

A place where all things are made new by the sight and sound of Jesus.  The flesh-wrapped Word and surrendered Savior.

For twelve days (December 26 – January 6) we will gently trek through four of the miracles, parables and relationships of Jesus’ earthy days.  We will invite Him to appear from then to now, past to present, that we might cling to a future alight with hope.

After the two days he left for Galilee. (Now Jesus himself had pointed out that a prophet has no honor in his own country.) When he arrived in Galilee, the Galileans welcomed him. They had seen all that he had done in Jerusalem at the Passover Festival, for they also had been there. Once more he visited Cana in Galilee, where he had turned the water into wine. And there was a certain royal official whose son lay sick at Capernaum. When this man heard that Jesus had arrived in Galilee from Judea, he went to him and begged him to come and heal his son, who was close to death.

“Unless you people see signs and wonders,” Jesus told him, “you will never believe.”

The royal official said, “Sir, come down before my child dies.”

The man took Jesus at his word and departed. While he was still on the way, his servants met him with the news that his boy was living. When he inquired as to the time when his son got better, they said to him,

“Yesterday, at one in the afternoon, the fever left him.”

Then the father realized that this was the exact time at which Jesus had said to him, “Your son will live.” So he and his whole household believed. This was the second sign Jesus performed after coming from Judea to Galilee.

Turbulent were the days when Jesus returned from Judea to Galilee. Government, whether political or religious, seemed a greedy geography. The power structure of the day was complex and confusing and both factions were fractured.

The Roman rulers were taken by the task of making everyone work for Rome and set about pitting people against each other, so they couldn’t come together to oppose Rome’s rule.

The religious leaders were persistently purposed to gather the people to a government made in their image, even though that image differed and deviated from all God imagined. Fiercely reacting to mercy, they rejected the fleshed mercy, come to meet them all.

What both government structures seemed to agree upon was their view of power. Both believed it existed for the benefit of those who had and held it, not the powerless. Galilee of that day was a crumbling castle, unable to contain a King coming to upturn every insistence, intention and ideology they had built brick by brick without the crowned Carpenter.

Jesus arrived back in His hometown where expectations and emotions were running high and hot. Those on the heels of Him from Judea, having seen all He did during Passover, wanted to remain in what He was doing. Yet those who would not go, thought they knew Him because of the original geography He came from. They remembered not the origin of Him. They lived not in what He was doing, but what they believed He couldn’t do. The door was already opened to chaos and conflict when He crossed their threshold and further shook the structure, because He came in peace.

Poignant and problematic were the days at hand, when a member of Herod’s court, a royal official, carried his heavy heart from Capernaum to Cana, seeking comfort.

This man was not of meager means. He was wealthy and affluent, but became rich the moment he recognized his need of Jesus. His son lay frail and feverish, hanging by a thread, life in jeopardy.

Twenty miles the father had journeyed to Jesus. He found who he was seeking, but was soon to see that he would need to follow Him, not the other way around. So committed was he to the geography of his grief, he was unaware he was becoming a skin map, marked by Jesus, tethered to trust.

Before Jesus, the official stood, begging the One who invited all hungry and thirsty to come to Him, to come to Capernaum as quickly as possible. In need of what money could not buy, he faced the One who could provide it all through the price He would pay.

The weary royal may have asked around town about Jesus and where to find Him, so a crowd had gathered. To the crowd, Jesus was yet about what they could see. So He said to all present, that signs were all that caused them to seek. Had Jesus followed the fragile father, they all may have come too. To gawk and gape. But He wanted to mark their maps with a greater destination. Glory.

The Galileans wanted to see if Jesus would do what they had heard.

Sign seekers don’t often get what they want, but He will still offer what we need. He didn’t want to give them something to see, but something to believe.

Jesus bid the official go. It must have been quite a shock to the man that Jesus would not accompany him. He wasn’t being sent away, but asked to faithfully follow the One he had found. The royal thought Jesus could only save if He came to his geography, but would learn the power of coming to His.

The official was not being given what he asked for. He was offered what he needed. Jesus’ word sent him in the right direction. He took Jesus at His word. The father followed. He turned towards what was true and real. This man with great authority in an earthly government, learned how to truly wield it in God’s.

All the while, the official’s servants had been watching a deteriorating condition. Until. Suddenly. Not one person saw Jesus heal the suffering son. Yet they believed and set out immediately to find their master, so he would no longer be in anguish. They may not have occupied the faith of the father, certain Jesus would heal. But they knew who had healed the boy the moment it happened.

Upon the road they met their master and the servants did an amazing thing (because amazing things just follow miracles all around). They echoed, they repeated, the very words of Jesus. They had not yet known Him, but His word was alive in them.

Maybe there is a relationship between the words of Jesus and those who serve alongside Him. Maybe they are meant to sound the same. Just alike. In likeness.

Because the man, the man with everything, came with nothing, his entire household believed. His house became a home because they knew Him. Jesus. Brick and mortar became a household of faith. A seat of authority. Not one saw, but all believed. They each became a deeper shade of soul. A crimson trace of a flowing vein.

If we come for signs, we may never see. The authority we’ve been offered is meant to be given, because it saves. It brings power to the powerless. Faith to the found.

The royal official met Jesus in the valley of what he believed.

He saves, He heals, He provides.

Valley is the place where we are hemmed so tightly into Him, that what is inside, what can’t be let go, begins to seep out. And once we see it, we know it is not for forfeit and forgetting. It must ascend the mountain because He gave it, He lived it, He loved it – so we could too.

Valley finds the tenderest place of our deepest belief and asks us, implores us, to make it manifest.