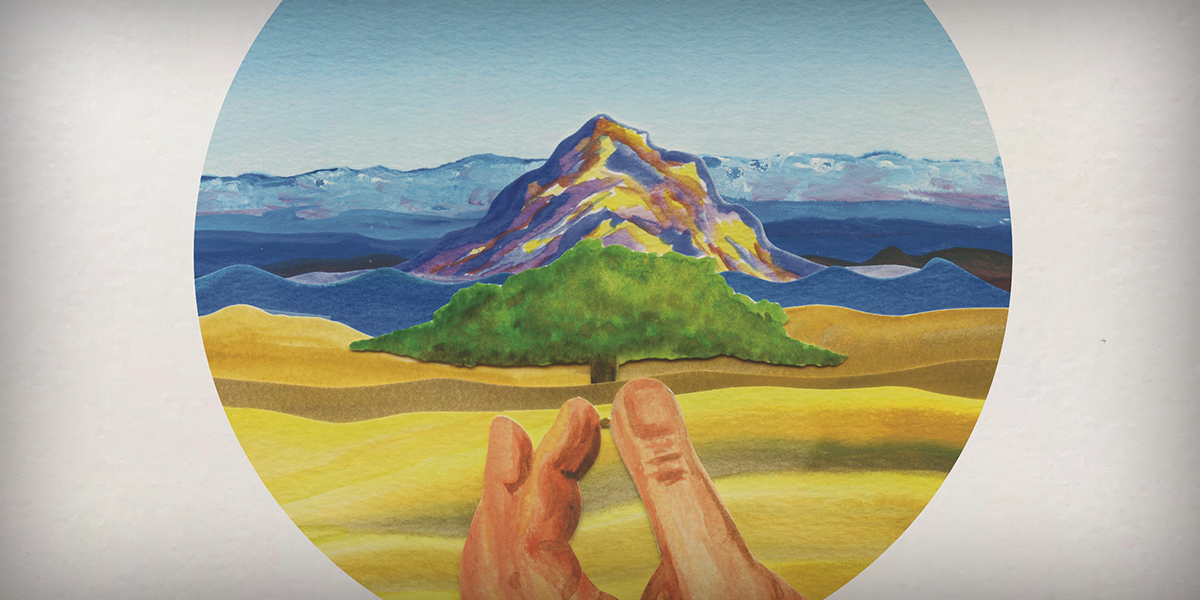 He told them another parable: “The kingdom of heaven is like a mustard seed, which a man took and planted in his field. Though it is the smallest of all seeds, yet when it grows, it is the largest of garden plants and becomes a tree, so that the birds come and perch in its branches.” Matthew 13:31-32

Nearing forty-seven years ago, I shivered in the midst of towering trees, whispered a yes and shouted a Name. Suddenly, I belonged to something so much bigger than me. Someone grand and great. I felt like a speck and that feeling was wondrous. Surrounded and tucked inside holy. It was like being the tiniest seed between enormous fingers, unsure of where I would be planted, yet so certain it would be the sweetest soil.

Years later, my person would pen a song with me, describing how I felt that day:

The mountaintop is His Throne of Grace
The towering trees are His Tabernacle
The endless sky His Cathedral
The riverbank His house of Praise
The rocks, the leaves, the wind, the breeze
Everywhere I look, I see the King (Jesus Christ, King)

Just before these holidays beckoned, we were deep in worship (though it was just beginning) in a little barn on a great big land. Words began to weave and I was swept up, carried away, back to a near forty-seven year old day and another not long after it.

You remind my dust what it was
You were in my dust and You called life
My dust rose
And I became formed
May my offering ever be a bursting heart that comes alive
To hold a speck of who You are, erupts a flood of who You are (Whisper)

In those moments, I KNEW there would be a mustard seed epiphany. For from the mountaintop, I swiftly moved to the baptismal fount. To remind me to remember, my parents gave me a mustard seed necklace. I wore it always, until I grew too big for it to hang tenderly upon my clavicle. It is planted deeply though, in the soil of my heart, a reminder of the day He cleared the weeds from the small space of me, leaving a planting that would take root. Since that day, it’s been impossible to overcome. The weight of it bears glory every time I read a tiny tale with vast meaning.

This tremendous tale was told by a man of no rank or means, born into bitty Bethlehem to a meager, modest maiden. Jesus’ disciples were audience for the short story. His words that day may have been a bit discouraging. Still expecting a colossal king, they traveled from town to town, finding more enemies than friends. Here they were, a group of uneducated fishermen with an obscure carpenter born into an animal’s manger, instead of occupying a throne.

Most things around them likely seemed insignificant, as insignificant as they felt. So what of a mustard seed? They didn’t yet know that this seed of the Kingdom might grow a tree in the shape of a cross. Their own seedbeds still needed sorting. Jesus’ words were so personal, woven for their private places. Their own fields. They weren’t quite ready for the harvest a minuscule seed could bring.

It takes twenty mustard seeds to make one ounce. But their flowers give birth to thousands of seeds that float on the wind to other bits of earth. When they find water and dirt, their stretching legs find home and take root. One seed’s bush and bloom grows quickly, in just a few weeks. The growth is utterly invasive. Within a few generations it can overtake an entire field.

This was a truth those opposed to a coming Kingdom they couldn’t control knew. They were frightened by the size and speed of growth even those closest to Jesus couldn’t see. They saw what Jesus was planting as a weed and tried to uproot it with all they could muster.

In Jewish law, it was illegal to plant a mustard seed in a public garden because when it grows, it overtakes everything else.

Before we aim any arrows at the “they” whether disciples or those opposed, we must look at our field. Our own ground. For we sometimes want to parlay the pierce that makes way for the seed. Though we seek the Kingdom, we don’t always recognize it. This Kingdom we were born for, when it comes, might not look like a thing Pappa would plant. We can set ourselves to incessant weeding of a noxious weed, instead of nurturing the beautiful flowering shrub that refuses to be tamped down.

What comes from the wee seed is wonder. This planting is potent.

We too, sometimes struggle with invisible miracles and unseen origins. The Kingdom, with its upside-down, upending ways, is not always a welcome addition to the lives we are trying to build. For ourselves. Our present problem is that we look for the tree first and miss growth in motion. We miss being moved.

Chosen for things much bigger than us, we often resist the tiny gem His hand would place in our setting. We want the scene to change so much, we stop looking for Him and this Kingdom that comes moment by moment, into each and every day. We don’t know just how a seed will be planted and so disregard “insignificant” things.

A tiny idea, a simple invitation, a tender thought, a meaningful conversation, a dream at dusk. All endless possibilities in the hand of an anything-is-possible God. We often look for the “ta-da” instead of the ever-approaching awe.

Here, comes a harkening to the Old Testament image of Daniel 2. He saw a vision of a kingdom that would start out as a little bitty stone, and grow into a great mountain that would fill the entire earth. A mystery in the making. A mountain might turn into little stones, as it breaks down over time, but little stones don’t seem like mountains when you happen upon them, along your way.

Small things in life are gigantic for the Kingdom. In the shortest of His parables, Jesus revealed a mysterious reality. Delving deep, looking past the visible allows a great in-breaking. Our broken ground yields fertile fields. When we receive the root of Him, we get rooted, and what is to come, spreads its branches into a tree so great, the birds of every tribe and type come nest and rest. There is seed within the blooms and blossoms that feed and sustain. Who knows where those might go? A forest may form.

Together now, we wield all Heaven yields. And we see things such as these:

When the great offense is washed away by grace
When the impossible dream gets its chance to succeed
It’s the giant who is humbled
The man who cries as one redeemed
A lover’s gaze, a baby’s face
Everywhere we look, we see the King (Jesus Christ, King)

A Hebrew word for the Hand of God is the word yaman and is an expression of close relationship. To be held in His Hand is to share your heart with Him as He gives His to you. His Hand is a place to share sweet secrets and receive revelation royal.

To be held in the Hand of God is to be held close to His heart.

To be touched by the hand of God is to be resurrected.

You lay your hand upon my chest and resurrect all the dusty places. Your presence is my bed where I can rest. You made a space. (Whisper)