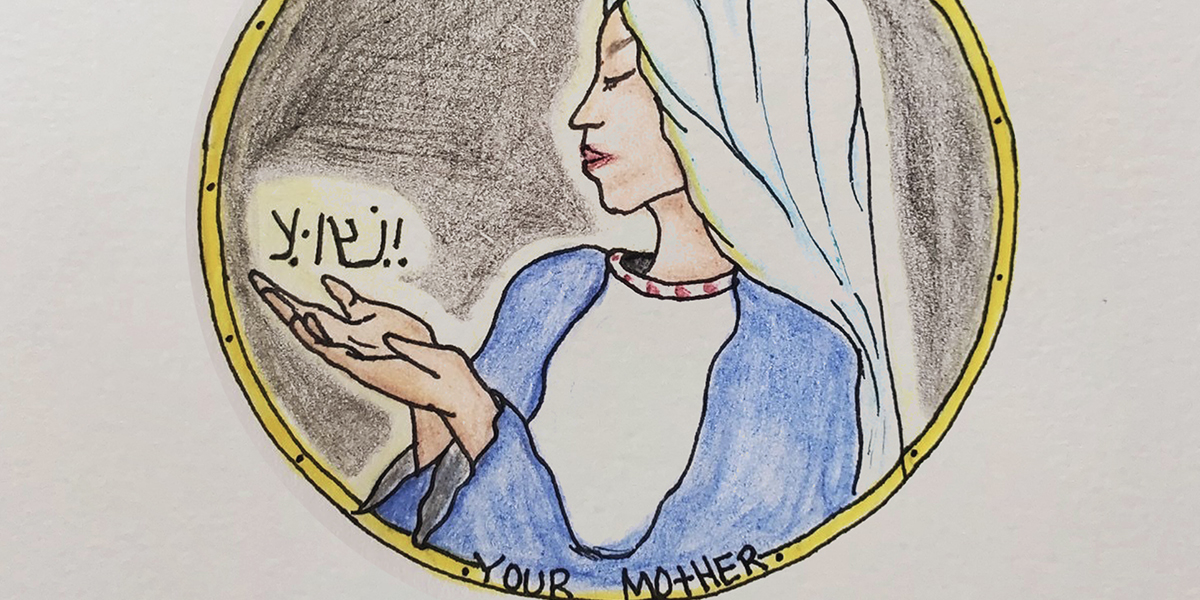 But she was greatly troubled at the saying, and tried to discern what sort of greeting this might be. And the angel said to her, “Do not be afraid, Mary, for you have found favor with God. And behold, you will conceive in your womb and bear a son, and you shall call his name Jesus. He will be great and will be called the Son of the Most High. And Mary said, “Behold, I am the servant of the Lord; let it be to me according to your word.” And the angel departed from her. Luke 1:29-32, 38

And all who heard it wondered at what the shepherds told them. But Mary treasured up all these things, pondering them in her heart. Luke 2:18-19

And he said to them, “Why were you looking for me? Did you not know that I must be in my Father’s house?”  And they did not understand the saying that he spoke to them.  And he went down with them and came to Nazareth and was submissive to them. And his mother treasured up all these things in her heart. Luke 2:49-51

Mary makes me a little messy. A chosen vessel filled with yielded yeses and hard nos. From maiden to mother she held Heaven. She would be the first persecuted in the walk from womb to wood, yet Christ would carry her every step of the way. She who faced public humiliation would pause in every place of His persecution.

Angels attended the birth of her babe and she would attend to His needs, as if He were any other boy. Scraped knees would be bandaged by Mary, but she would be unable to stop the bleed of the cross. She was the first to gaze into His eyes, He the One who would look deepest into her soul.

Each time Jesus and His brothers came in from hayloft play, bringing the smell of stable, she may have remembered the one in which He in manger lay. With each journey to the temple with sacrifice and praise, she must have seen the sheep and recalled the shepherds who ran to worship at the sight of star and Savior. As she tucked Him in on starry nights, she was certain to recall that the little boy with a toothless grin, was the Bright and Morning Star.

There is a sweet truth that a little boy’s mom is his world. But Mary, to Jesus, was the one that would reveal what the world was meant to be. With Him. As they dwelt together in a home, within an inhospitable world, He would know that world could choose well, because she did.

Mary didn’t tuck herself into dark recesses when understanding wasn’t yet near, but clung closely to light. She and Image incarnate would meet in the marrow of moments and memory over and again.

Jesus’ life was lived as an intimate conversation with humanity, but His first and final words would be with His mom. Coos and cries would become conversations consumed with the words and ways of His Father.

Each and every thing, Mary pondered. All of it. Words said about Him and words He said to her, were treasures. Everything between them was precious, because there was absolutely nothing between them.

At angel’s wind, she was stirred. She was put in motion to receive all her heart needed to be still.

At baby’s breath, her heart turned temple, as she began to preserve everything about Him, from perishing. From being lost.

At temple threshold, when Jesus seemed lost, she was found. There, upon stony floor, she asked that every stoned place in her be removed. She weighed her heart, so her flesh might be leveled and a path paved to the wonder of Him.

To ponder is not simply to weight and scale, though it does derive from the word pound. To ponder is to reflect that upon which you look. To be a reflection of what is seen on surface and the deep beneath it. To look like this is to be hemmed in, as a pond is enclosed by its banks.

I’m marveled by how many of Jesus’ miracles were wielded with water. Water to wine and waves walked upon. A coin found in a fish in the sea. A dove descended at the baptism of the Lamb. A man healed with spit and soil.

When Mary looked at Jesus, she saw all of this. The always been and yet to be. I think Jesus saw much when He looked at her too. Flesh could be faithful. And Love would not fail.

The exchanges of Son and mother, Savior and saved are some of the most poignant in scripture and story.

On the third day a wedding took place at Cana in Galilee. Jesus’ mother was there, and Jesus and his disciples had also been invited to the wedding. When the wine was gone, Jesus’ mother said to him, “They have no wine.”
“Woman, why do you involve me?” Jesus replied. “My hour has not yet come.”
His mother said to the servants, “Do whatever he tells you.”
Nearby stood six stone water jars, the kind used by the Jews for ceremonial washing, each holding from twenty to thirty gallons.
Jesus said to the servants, “Fill the jars with water”; so they filled them to the brim. John 2:1-7

I have pondered this story much. It is a treasure in my chest. Many times I’ve shared of Mary seeing a family’s shame and Jesus asking how they could be drawn together through it. How they could become one.

Today I have a gain I’ve gleaned. An epiphany. With four words, “They have no wine” Mary became a matchmaker for a Groom and His Bride. Her Son and the world He came for. He wasn’t taking too long; she had simply arrived at the truth of who He was, to everyone, for everyone, not just her. She was saved, so He could be delivered to a world weary and waiting.

In Hebrew the word for son is ben. The pictograph of the word is that of a tent or house, followed by the picture of a seed. This seed is a new generation of life that will bring and birth new ones.

A son, The Son sent for us, continues the house from which He came and all that He is of.

The root of ben is banah, meaning, “a son or builder of the family name.”

The stone which the builders refused is become the head stone of the corner. Psalms 118:22

The word for stone used (twice!) is eben and the Hebrew word for father-son. The relationship of the Father and the Son and that which it builds with us, is the stone.

One last thing. Eben is the stone spoken of by Isaiah, the costly stone, the one raised as a testimony.

What a Son!! Stone nailed to wood, that world could testify to the goodness, the greatness, of His Father.