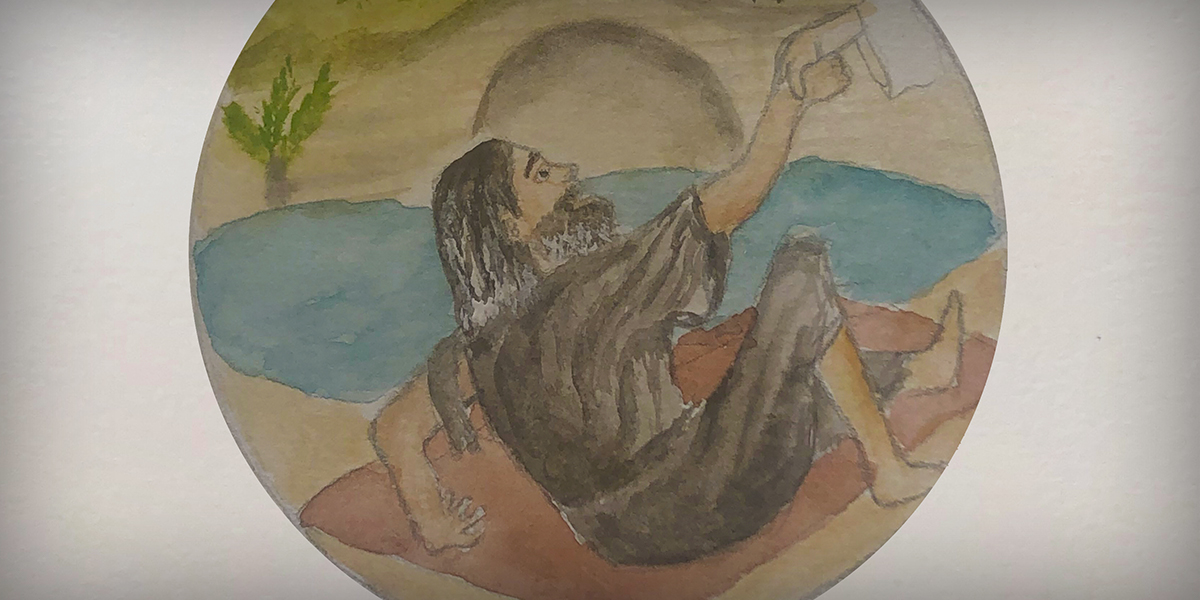 Some time later, Jesus went up to Jerusalem for one of the Jewish festivals. Now there is in Jerusalem near the Sheep Gate a pool, which in Aramaic is called Bethesda and which is surrounded by five covered colonnades. Here a great number of disabled people used to lie—the blind, the lame, the paralyzed. One who was there had been an invalid for thirty-eight years. When Jesus saw him lying there and learned that he had been in this condition for a long time, he asked him, “Do you want to get well?”

“Sir,” the invalid replied, “I have no one to help me into the pool when the water is stirred. While I am trying to get in, someone else goes down ahead of me.”

Then Jesus said to him, “Get up! Pick up your mat and walk.” At once the man was cured; he picked up his mat and walked.

The day on which this took place was a Sabbath, and so the Jewish leaders said to the man who had been healed, “It is the Sabbath; the law forbids you to carry your mat.”

But he replied, “The man who made me well said to me, ‘Pick up your mat and walk.’ ”

So they asked him, “Who is this fellow who told you to pick it up and walk?”

The man who was healed had no idea who it was, for Jesus had slipped away into the crowd that was there.

Later Jesus found him at the temple and said to him, “See, you are well again. Stop sinning or something worse may happen to you.”  The man went away and told the Jewish leaders that it was Jesus who had made him well. John 5:1-15

For thirty-eight years, the lame man lay on his mat, waiting for someone nearby to help him enter the pool. Here, the marginalized marinated in myth. The pool healed. If only you could be submerged. Most of the many gathered there, could not make their way in, without the help of another, and help was slow to come. The deep need of those waiting, though, was not shallow waters, but great mercy.

Jesus came and met myth with miracle. He will always walk on water, so we don’t drown.

The man waited to wash. Jesus came that day, to make him clean.

To wash, in Aramaic, is rachas. Its meaning is “to trust in.”

In the midst of his mess, Jesus asked the man a majestic question. “Do you want to be made well?”

The man was heavy laden and Jesus asked a loaded question. To be well is to be absent of war. At peace. The man lame, could not make his way out of the world in which he found himself. But he could be moved to a different one.

Injustice surrounded him. There was so little help, for so many cries. What could he do, when he couldn’t even help himself? He could simply answer the question Jesus asked.

Avah, a tiny word with massive meaning. For to be willing is “to harness the power of God so that the heart is filled with His presence.” To be satisfied with who God is.

Jesus asked, “Will you be satisfied with who I am and all I offer? Can you trust that the world I have waiting is far better than the place in which you wait?”

The man didn’t know how to get to the world. Jesus gave him a way.

His need wasn’t just to be well, but to be a well.

Creation, the created, has the capacity and call to find the places where the Image of God is diminished and restore it. This man had not been seen, and on the day meager met mercy, he not only walked, but received sight. The ability to see beyond himself, and his renewed image, and be moved to find that Image in others.

Jesus didn’t just meet the many with mercy, but with justice. “Do you want to be well?” This question heralds the goodness of the Gospel. There is mercy for the marginalized. He comes with justice, Brother of all. Because, they truly are, all our brothers.

V’hechezakta Bo means “when your brother becomes low, you shall strengthen him.”

This is justice that joins. No arms-length love is this, for it causes us to hold onto each other. We cannot give at arms-length, but with our hands gripped in fellowship. Wasn’t Jesus ever in trouble, because He touched?

Maybe it’s time for us to enter the fray, start a ruckus, by reaching down to those who can barely look up.

The frail and fragile need of each of us, is fellowship. By holding on to one another, we create a bond, and strength soon flows two ways. Stirred waters for a major movement.

The man had occupied the space of the disgraced, until met by grace. He needed to be re-imaged in his own eyes. He wasn’t all that had disabled him. He was everything that was abled. Newly seen, he could reflect and reveal God’s governance. How He governs.

Mat gathered and legs taken, the man ran to the local government to tell them that Jesus reigned. He stood before them, a flowing river from an uncapped well.

When we are well, there is water. For the weary and the waiting.

When we are wells, we steward well and love hard. We aren’t reserves, but rapids. Garden growers and Gospel grafters.

The lame man lay near the Sheep Gate of the temple, which was where the sheep were brought through for sacrifice and offering.

How many people passed the man and never offered help.

Enough, Jireh, was first used at another such gate. The one at which Abraham offered Isaac.

Dagger was dared to plunge, but God became the shield. Enough. More than enough.