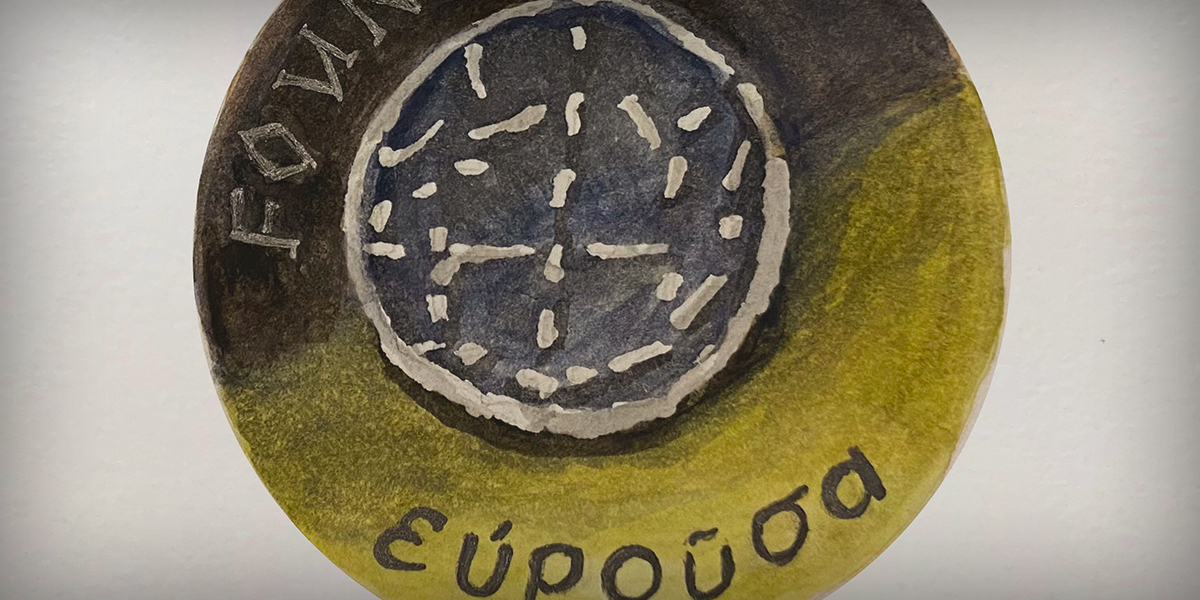 “Or what woman, having ten silver coins, if she loses one coin, does not light a lamp, sweep the house, and search carefully until she finds it? And when she has found it, she calls her friends and neighbors together, saying, ‘Rejoice with me, for I have found the piece which I lost!’  Likewise, I say to you, there is joy in the presence of the angels of God over one sinner who repents.” Luke 15:8-10

She used her broom like a winnowing fork, upon her floor of dust and reeds. A bigger mess was being made in her frantic search, but she would have to worry about that later. She didn’t know how coin had fallen into crevice, but she knew she had to find it.

There was a day she had worn the headdress that held the coin, with a lightness that was only memory now. Upon her wedding day, she wore it to hold her veil, each coin dangling as a declaration of her dowry. In days since, she donned it for special dinners, a reminder of her identity. She belonged to someone. But now, that someone was gone. And today, the coin bore a greater weight than its wage of a month’s salary. It was harder now, to remember who she was.

In a tiny house, in a crowded village, she searched. Her heart had barely beat since discovering the coin missing. Under mats and within clay vessels she hunted, braving to believe, it could be found.

In her house with few small slits for windows, she quickly realized, she would need more light. But oil for lamp was not cheap. Could she count such a cost, to see?

Like a bride awaiting a groom, she held the lamp, oil-filled and light-laden. She began going over every area again, from a different angel. She looked through every space, shaded and aglow.

Nearly giving up, but not daring to, she saw it, a small glimmer. She swiftly swept it up, and blew away the dust. Her breath caught, as the grit began to glow.  She remembered then that when light fills darkness, captive treasures are found, treasuries are opened.

Her days before this one consisted of sewing and knitting, cooking and conversations. The village knew her. They lived their lives together, day by day. But this day, she would rush out, into the streets, among the people and call for a celebration. Come. Rejoice. The coin has been found. I have returned. From grief to glory.

A parable is a story cast alongside our own, that reveals a deeper and wider direction to where we are.

While I know that these few lines with much meaning are purposed for the promise of finding lost and locked, I can’t help but share from my own script, when He cast the lines in my deep sea, on a journey across a tender tundra, Antartica.

Our itinerary was missing a day. We were perplexed. And purposed, to find everything that day held. I won’t list all we found here, but will say, I found a fullness of the parable upon frozen ground, above a rushing river.

I knew right away. How often had I looked at a day as a problem to be solved instead of a discovery to make? A series of events to complete instead of majestic moments to meet?

Days are dark indeed, if we don’t have our oil upon its stand, the vessel brimmed with oil. Every moment can be a match that ignites the darkness to come to the light. Each day is awaiting its unveiling, like a bride awaiting a groom, ready and running towards Him.

Days are discarded, when we don’t look in every nook and every cranny for what they hold. At Who holds them. If we don’t gaze deep into the eyes of the One who put them together, wove them wonderfully for us, to wonder through. What might be revealed when a people are looking?

His radiance lights every darkness, where hidden things are held.

A Hebrew word for radiance is nahar, meaning, “to flow or a flowing stream.”

We say we have full days, but we might be missing the point. Busy and bustle don’t make a life, but a flowing stream leads to one. Especially a radiant One.

He comes ruddy, until we run and catch the flame. All aglow, He is recognized, beyond the skin of us, by the heart of another.

Radiant is the name I say, the one I call, when I want to take Him everywhere with me, like a river overflowing its banks. It is the one that reminds me, not to be like Him, but that I am like Him.

They looked to Him and were radiant,
And their faces will never be ashamed. Psalm 34:5