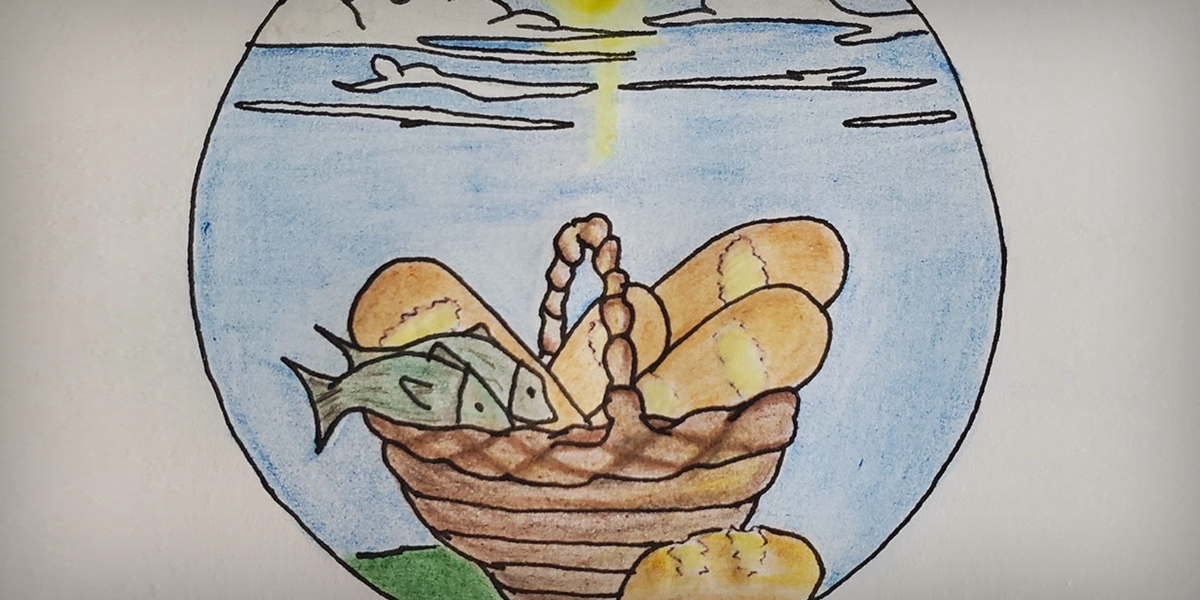 The apostles gathered around Jesus and reported to him all they had done and taught. Then, because so many people were coming and going that they did not even have a chance to eat, he said to them, “Come with me by yourselves to a quiet place and get some rest.”

So they went away by themselves in a boat to a solitary place. But many who saw them leaving recognized them and ran on foot from all the towns and got there ahead of them. When Jesus landed and saw a large crowd, he had compassion on them, because they were like sheep without a shepherd. So he began teaching them many things.

By this time it was late in the day, so his disciples came to him. “This is a remote place,” they said, “and it’s already very late. Send the people away so that they can go to the surrounding countryside and villages and buy themselves something to eat.”

But he answered, “You give them something to eat.”

They said to him, “That would take more than half a year’s wages! Are we to go and spend that much on bread and give it to them to eat?”

When they found out, they said, “Five—and two fish.”

Then Jesus directed them to have all the people sit down in groups on the green grass. So they sat down in groups of hundreds and fifties. Taking the five loaves and the two fish and looking up to heaven, he gave thanks and broke the loaves. Then he gave them to his disciples to distribute to the people. He also divided the two fish among them all. They all ate and were satisfied, and the disciples picked up twelve basketfuls of broken pieces of bread and fish. The number of the men who had eaten was five thousand. Mark 6:30-44

Aside from the resurrection, the story of Jesus feeding the 5,000 is the only miracle recorded in all four Gospels. This tall tale must carry a mighty message.

I wonder, how many times the people with Jesus that day had been hungry and weary. How many times had they sought to be satisfied or for a place of rest, only to still feel hollow in the end?

Running on empty must have been what led the crowd to follow Jesus across the Sea of Galilee and up the mountain. They wanted to be full, filled. Fulfilled.

The trek led them to a remote place. After such a hike, it may have been hard to get their bearings. Surely they felt a bit lost and confused. As they got still, Jesus was moved. His compassion was what led Him to lead them to such a faraway field. These sheep needed a Shepherd. It was time to sign His name (a Hebrew noun for remote means “sign, signboard, name, nameplate”) upon their hearts. To gather them to Him.

The best bet of the disciples was to send the people away. Not quite ready for inheritance, they measured His generosity in wages. Their work wasn’t yet worship.

“Take nothing for the journey except a staff—no bread, no bag, no money in your belts.” Mark 6:8

Fresh from afar, the disciples had already forgotten where they had been. A place where only He could provide. He came to meet the marginalized and they wanted Him to narrow Heaven down.

Dusk fell and the disciples wanted to turn in. Jesus, however, wanted to break bread. This, the feast for which He came.

The people were weak after walking so far. In Hebrew, this condition is known as meraphim, which comes from the root of rapha. It means to “sink down” or “loosen one’s grip.” Jesus wanted them to take hold. So he met them with a miracle.

From this time many of his disciples turned back and no longer followed him. (John 6:66)

Not long after this meal was multiplied, many left. Those with Him and around Him began to grumble. How could He be the Bread of Life? Weren’t they still hungry? For war?

They wanted a mercenary; He came with charity. They sought prosperity; He pulled them towards peah.

They all knew the concept, but had not the compassion for corners. In Hebrew, corner is kanaph. Corners are meant to hem people in, not keep them out. These edges, these fringes, are where people are found. To dwell in a kanaph is to be covered and offer shelter. Corners are meant for opening, not cutting.

Jesus offered portions, but they only wanted to give fragments.

The disciples had just been fed from corners and compassion. Had it not been for the Body of believers, as they traveled the land, teaching about His love and mercy, they would have starved.

This miracle of many and much, is an echo of wilderness wonder and manna meeting. Those moments etched from Old Testament prophetic promises. The new day would find Jesus filling tables full, in order to fulfill God’s Word.

In Jerusalem, the LORD of Heaven’s Armies
will spread a wonderful feast
for all the people of the world.
It will be a delicious banquet
with clear, well-aged wine and choice meat.
There he will remove the cloud of gloom,
the shadow of death that hangs over the earth.
He will swallow up death forever!
The Sovereign LORD will wipe away all tears. (Isaiah 25:6-8)

Yes, the Sovereign LORD is coming in power.
He will rule with a powerful arm.
See, he brings his reward with him as he comes.
He will feed his flock like a shepherd.
He will carry the lambs in his arms,
holding them close to his heart.
He will gently lead the mother sheep with their young. (Isaiah 40:10-11)

The Word became flesh, that we could eat. The Word lives on, that we would feed.

When asked to bare our corners, our thoughts can race like Philip’s ran, straight to the cost of the meal. He quickly calculated, seeing the task as impossible because he approached it as if everything depended on his own work.

We may set tables and put plenty upon plate, but He is satiety. Only He is sufficient to sustain. The miracle is, He wants us with Him, at table and trough. Our satisfied leads to another’s saturation.

Feeding the hungry is an expression of compassion and a demonstration of the presence of God’s kingdom.

From beginning to end, the table has been tethered to this stellar story. Look back at Elisha, while looking forward at us.

Elisha told his servant to feed the people gathered, although there was not enough food for the hundred men. One of the men said, “How can I set this before a hundred men?” (2 Kings 4:42–43)

Pappa will always do more than provide. Wasn’t Jesus the reverberation? Aren’t we here, the reiteration?

To seek His face, holds such profound meaning in the Gospels. This name is so significant because the theme of it ribbons though all of scripture, our whole story.

From the beginning, He faced the deep and stirred the waters. There, in the growing garden, through letting and light, His face found form.

Though exile followed, He never hid Himself.

In the Gospels, His face, His presence, found flesh. Found us. Because of that, we always find our way.

In the end, Revelation tells that we will become reunited with His Face. We will never leave His presence again. Not once has He left ours.